This is Bebe.  Isn’t she adorable?

In these pictures, I believe she’s about six weeks old.  The runt of the litter.  It’s something we have in common that makes me go all gooey inside whenever I think of her.

As I mentioned in my previous post, my writer-brain searches for story.  I can’t help it.  Only, on my last field visit to the Male Observation Lab (aka, the day-job), my writer-brain focused on character.  Specifically, a hero.

See, when Bebe’s dad (BD) first laid eyes on her at the kennel, she was curled up in the corner, eyes closed, and shivering.

BD thought the vet who was present had come to nurse her to health.  Instead, it turned out the breeder didn’t like her color, and she was sick on top of being a runt.  Bebe was scheduled for a trip to puppy heaven.

As BD put it, “I had to give her a fighting chance.”  So instead of one of the healthy puppies who scrambled all over each other as they played, he scooped up Bebe and took her home. 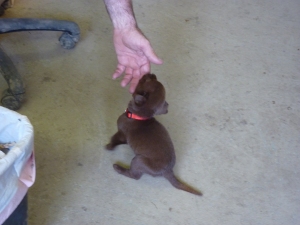 Two weeks later, Bebe’s active, and curious, and happy, and making wonderful puppy growls when she plays.  And she adores her dad.  🙂

The whole experience made me think about a romance writer’s heroes and heroines — what makes them who they are, why they do the things they do, and, really, how they need to be created so their layers show as the story progresses.  Kind of like an onion, only not so smelly.

Because while the dudes in the Male Observation Lab sometimes seem so unhero-like (oh, can I list a bunch of examples!), when they turn around and do things like this, it makes a writer discover something way deeper about them.

And, really, isn’t that discovery what we’re supposed to provide for the heroes/heroines in our stories?  Just a thought. . ..