It’s been icky out.  Icky as in liquid sunshine poured from the sky, and temperatures plummeted so that it seemed more like November than May.  Sigh.  And to think the temps were in the mid-80’s not that long ago.  Mother Nature’s a definite tease.  Or schizo. . ..

Trying to find a bright spot this last week, I decided to make a marinara sauce.  My version, not the kind I sometimes dump out of a jar (looks up at the ceiling and whistles with her fingers crossed behind her back).  I felt the Domestic Goddess rise up.  Why shouldn’t the family get something so fabulously made like my marinara sauce?  (Yes, my Domestic Goddess has a rather high opinion of herself!)

Of course, there is a process to making sauce in the Alexander household.

Step 1 – Find the recipe.  Normally, this would be easy.  I just have to look in my personally edited cookbook.  You know, it’s the one we all have.  It’s got loose pages and clipped magazine and newspaper recipes of things I might want to make.  Maybe yours might even have that one recipe for Grandma’s fudge that no one’s been able to find since she crossed over into Heaven’s Kitchen.  (Note to self: where is that recipe, anyway?)

Step 2 – Scratch head.  Because, of course, that favorite recipe – the one I’d personally developed and refined over countless hours at the stove – has disappeared.

Step 3 – Search the computer files.  Only. . . what the heck did I name it?  I’m a writer.  Simply calling it Marinara Sauce is too boring.

Step 4 – Thank Niece.  She found it thirty minutes later stuffed behind other recipes in the clear plastic recipe holder on the counter – exactly where I’d left it from the last time I made “The World’s Greatest Pasta/All-Purpose Tomato Sauce EVER” — Sorry.  It’s that writer-thing. . ..

Step 5 – Assemble ingredients.  A few cans of this and that.  An onion that has parts that are still edible, minced garlic-in-a-jar, a few heaping tablespoons of red pepper flakes, and a crock pot — Because, heaven help me, standing at the stove stirring the sauce every ten minutes just isn’t happening!

Step 6 – It’s important to remember that opened tomato can edges are sharp.

Step 7 – I dumped everything into the crock pot, set it on low, and walked away. 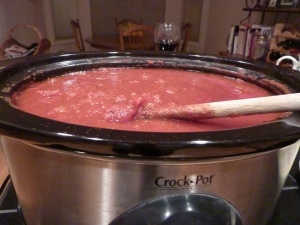 Twelve hours later I congratulated myself on my brilliance because I had enough sauce to last through most of the summer.

Now all I have to do is remember it’s stuffed in the back of the freezer somewhere. . ..

And that, my friends, is how sauce is made in the Alexander household.  🙂