Tailgaters and Football and . . . Romance? 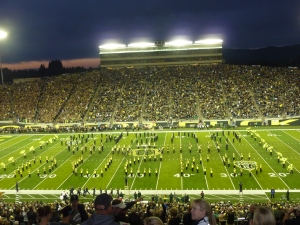 I’m a huge fan of Duck football.  Have been for years.  Which is something of a surprise since for most of my adult life I’d considered the sport a huge waste of time.  (I know, huh?!)  But thanks to Hubby, it was either learn to tolerate the game or end up on the sidelines for at least four months out of the year.  THAT wasn’t happening.  I also figured that if I was going to spend a minimum of three hours per game watching a bunch of guys chasing after a ball, I might as well learn as much as I could.

I don’t know about other writers, but I have a hard time turning off the writing brain.  Okay, okay, so I managed to forget about my WIP through the tailgater last weekend.  It wasn’t hard. 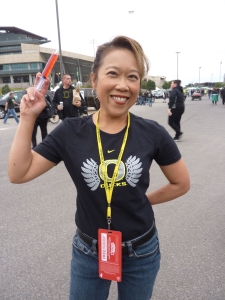 But as I sat in the stands at Autzen Stadium and cheered on the Ducks later, the writing brain clicked on, which led me to an interesting observation: there is a parallel between football and crafting a romance.  And it’s all about conflict.  (Can you tell I’m in edit-mode with my WIP? 🙂 )

I mean, think about it.  The opposing team runs onto the field and the crowd boos.  Yet, without the opposition, we wouldn’t have a game, now would we? 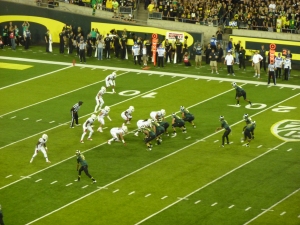 So too with story.  Happy people doing happy things in a world where everything was perfect all the time is kinda lame.  There would be no story.

In a romance, conflict questions how two people with differing views can possibly fall in love and have a happily-ever-after.  If it isn’t easy to justify a relationship with REAL conflict in REAL life (beyond “he doesn’t put the toilet seat down”), I think it’s even harder when you’re making up a story!  Although some authors are brilliant at it.  Alas, that isn’t me. . .. (Umm . . . hello?  Why else would I be thinking about this stuff during a football game?)

So as I cheered the Ducks, I also came up with a couple of more ways to create greater conflict for my hero and heroine.  (Funny how that worked!  They are sooo gonna hate me!)  Life, after all, isn’t always about the tailgater.  Sometimes, you gotta pay attention to the football game, too.  😉