It all started when I rushed through a local box store to pick up cat litter.  Seriously.

I decided to by-pass the crowd inching their way down the center (why do they always do that when you’re in a hurry?), and cut through an aisle instead.  And that’s when I laid eyes on it: an ice cream maker, a stainless steel wonder with an ice-cold promise of relief from the stifling heat outside.

I figured it might be worth trying.  After all, what’s summer without ice cream?  Hubby and nieces love ice cream.  They eat gallons of it.  With our own little machine, the homemade version wouldn’t have all the extra preservatives and unpronounceable stuff in it, right?  And besides, I could probably find a Paleo version somewhere, so I could have some, too!  I hadn’t had one taste – none, nada, nothing-o – of the stuff for almost two years now.  Didn’t I deserve some?  (How’s that for justification? 🙂 )

And so it began.

I bought the sucker and proudly brought it home.  Then there was the search for the perfect Paleo ice cream.  It didn’t take long since a fellow blogger posted a blueberry ice cream recipe not that long ago.  (Thank you Cavewoman Cafe!)  The maiden voyage into ice cream making was on! 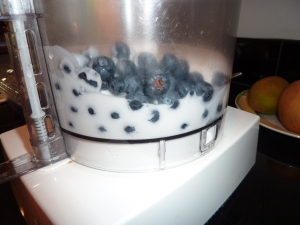 Mixing up coconut milk and blueberries.

Adding lemon peel, then later, the juice from this lemon. Don’t skip this step — it adds a fabulous flavor to the ice cream!

Patiently waiting for the ice cream maker to do its magic.

I must admit, it was way more complicated than opening a tub of ice cream, but it was really, really, REALLY good!  And I didn’t crash from it, either – BONUS!

What’s your favorite ice cream?  Have you tried making it instead?  What’d you think?  Good?  Bad?  Worth the trouble?

9 thoughts on “We All Scream for Ice Cream!”